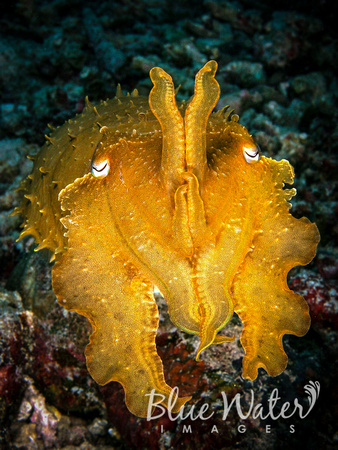 The Colorful Life of a Broadclub Cuttlefish (3 of 3)

You might know that cephalopods can change color quickly, but just how quickly and how drastically? I took a large series of photos of this broadclub cuttlefish and these 3 shots [of the same cuttlefish] cover a time span of only sixty-seven seconds. I suspect it was mimicking the rocks in the first shot and mimicking the sand in the second. In the third, I suspect it had given up all hope of avoiding me and was starting to get a bit ticked off as that's my last shot before it decided it had enough of me.

If you're skeptical that this is the same cuttlefish, I assure you it is. However, there are a few markings that persist through all three shots. On the two arms sticking up - locate the three bright white dots, they're clearly visible from the first shot to the second. They're harder to see in the third but they are there. Then, there's a scar to its left of its right eye (take a moment on that one :)). You can see that scar in all three shots. Finally, there are some slightly darker spots on the large/front right arm (its largest / right arm); those spots are in all three shots.

Finally, this sequence of shots was taken on my very first trip to Indonesia - in 2006. And this was an early Christmas present!