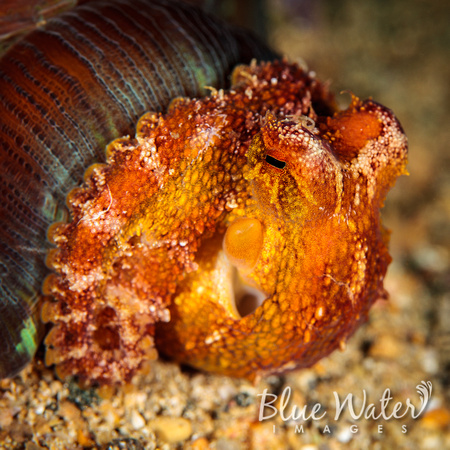 Date Taken: September 3, 2014 at 3:12pm
Dive site: Cheeky Beach (one of our FAVORITE dive sites in the WORLD!!) Indonesia

This one might surprise you - as it did me. I remember shooting this little guy and I remember thinking how brilliant it looked against the hard coral it chose for safety. But, I didn't think much of it until later when our fearless trip leader (who holds a Ph.D. in Marine Biology) told me how excited he was to have seen a mototi octopus (aka poisonous ocellate [spot] octopus). To which I replied, but I didn't see a bright blue spot. Similar to the blue-ringed octopus, the mototi octopus is known for bright blue spots, but the mototi only has TWO spots: one on each side just beside/below the siphon. And, also like the blue-ringed octopus, these little guys are highly poisonous!
⠀⠀⠀⠀⠀⠀⠀⠀⠀
So, I guess this is where it's both good news and bad. They tend to do their more "frightening" display (with full-on blue spots) when they're trying to evade a predator; a behavior known as aposematism (warning signals used to deter a predator). I like to think that it thought I was a friend rather than foe. ;-) The bad news is that I didn't get the telltale big-blue-spots; like I need more motivation to keep diving/looking!
⠀⠀⠀⠀⠀⠀⠀⠀⠀
So far, this is the only mototi octopus I've ever seen. These are especially rare (and/or, incredibly sneaky)!