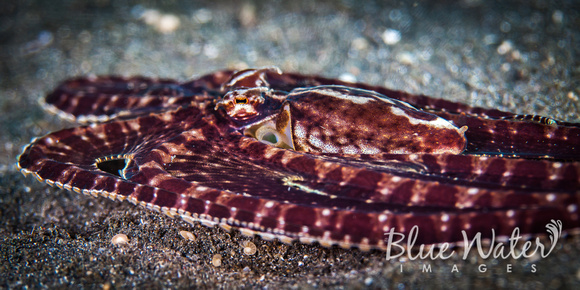 The magical mimic octopus is only occasionally seen on dives unfortunately. They're documented throughout the Indo-Pacific area but most sightings are in Indonesia. Even still, as of 213 dives in Indonesia, I'd only seen this one in Lembeh Strait. What's really odd too is that we saw this one on our very first dive (ever) in Lembeh only 20 minutes into the dive. So, we thought "WOW - this is incredible" we're going to see them "all the time." Ha! Were we wrong. So far, in our first two trips and 78 dives specifically in Lembeh, I've only had this one sighting (like we need more reasons to go back?!). Part of the problem is that they're both masterful at disguise and they often stay within (or close to) their burrow sometimes only peeking out a tiny bit. And, given their wide range of camouflage capabilities and mimcry I wonder how many I've missed and just swum right by?!

Why are they called the mimic octopus? They're currently only on of a few octopus species that mimic other marine animals in order to escape predators. They're known to mimic fish (such as the venomous lion fish) and sea snakes (also venomous) and they're believed to be intelligent enough to pick which animal is best to mimic based on the predator that's attempting to prey on them. Absolutely incredible intelligence IMO!

There are 3 images of this same mimic octopus. The first image consists of the mimic octopus fully out. The second image is when it was mimicking a flat fish / flounder. The final image is the last image I took as it went back into its burrow.