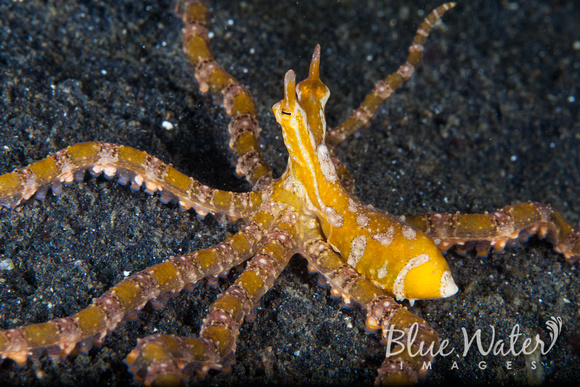 Often confused with the mimic octopus, the wonderpus is similar in its camouflage and mimicry. Like the mimic, the wonderpus is documented throughout the Indo-Pac area but most sightings are in Indonesia. And, EXACTLY like the mimic, I've only photographed this ONE wonderpus! Seriously, two of the most amazing octopuses and I've only seen ONE EACH in 213 dives in Indonesia! Now, there was one time where Paul (my dive buddy/husband) found one and I was already up from the dive. I ended up freediving (it was in the shallows) and I spent a few seconds with another one but it was already heading for shelter when I arrived.

So, back to this specific one and the irony to this (as well as the mimic) is that I saw this on our 3rd diving day in Lembeh after having seen a mimic on our first diving day there. Seriously, I could not believe that I had seen soooo many incredible critters in such a short period of time! But, I think we must have had some serious cephalopod karma on that first Lembeh trip as we encountered 8 different octopus species (wunderpus, mimic, blue-ringed, algae, long-arm, reef, starry night, and of course, coconut); I was in heaven. And, while I'm not religious, I often joke that if I end up at the pearly gates and get to ask one question - it's going to be that I'd like a "replay" of all the amazing critters I missed while I was diving (and that I just swam right by! ;-)). But, I'm OK with that; these guys are incredible at camouflage and it just makes it even more special when we encounter one.

Oh, and I have to make fun of the name... they're so photogenic that their scientific name reflects it! Gotta love the humor there. It's like Wile E. Coyote made up that name. ;-)