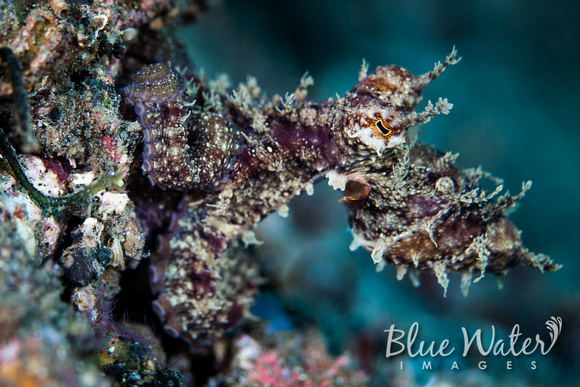 I didn't know many interesting tidbits about the algae octopus so I decided to search about and learn a few things. And, as with most octopuses, interesting I found! First, "algae octopus participate in three distinct mating strategies: mate guarding, transient copulation, and sneaker mating." (from Wikipedia)

Since many octopus species exhibit cannibalistic tendencies (which is not ideal for attracting others), most octopus have an interesting mating system where the male often passes sperm to the female from a lengthened arm (not getting all that close). Even still, the algae octopus chooses closer contact (more so than most octopus species) and often a male will guard the female's den to restrict their mating privileges (mate guarding). But, the algae octopus goes further than this, as it can hide its male parts (its hectocotylus) and disguise itself as female (to "sneak" past a guarding male); this is the "sneaker mating" technique. But, most interestingly, and to reduce possible problems, the male octopus doesn't even have to enter the den of the female algae octopus. Instead, the male passes its sperm to the female with a very long mating arm. In fact, they can stretch their mating arm to twice its normal length (transient copulation).