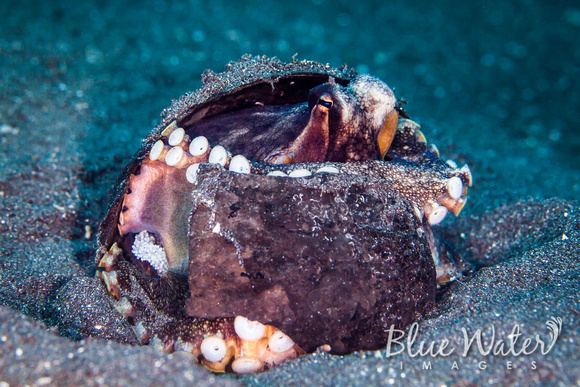 I absolutely had to post a coconut octopus in a coconut shell! But, even better, for this shot, I can finally say SHE! Why? If you look closely, she's guarding eggs (bottom left of the shell). We've found numerous coconut shells with flamboyant cuttlefish eggs but you won't find octopus eggs alone because the female octopus will stay with her eggs until the very end - starving herself in the process. Laying eggs is the final stage of maturity for a female octopus; she'll only do this once and she dies as the eggs begin to hatch.

Background: I had never seen a coconut octopus until I dove in Indonesia... and, in going back over my cephalopod shots, coconut octopuses are my number 1 (in terms of quantity of shots). They're also our absolute favorite octopus with which to play! Don't get me wrong, we don't handle any marine animals. But, with coconut octopus, it's a MUST to see if they want to check out some new tools (they're the first marine animal that's known to use tools). So, the best thing to try and do - is give them a tool. Specifically, if you can find a couple of shells or a coconut or a well-worn bottle... place it near them, watch them investigate its worthiness, and finally, see if they decide to use it for shelter. The best though, if they really love it, they'll try and take it with them (sometimes resulting in some very awkward attempts to run away while keeping their tool with them).