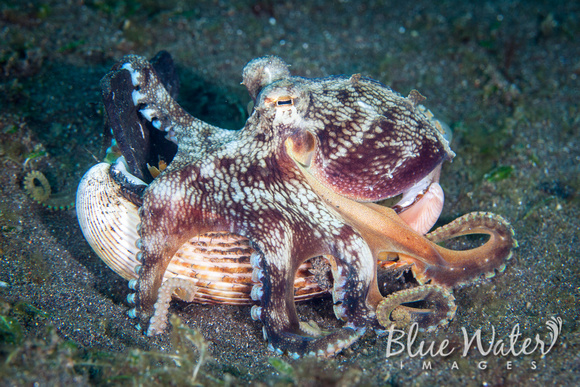 One coconut octopus, four shots of it trying to determine the worthiness of the scallop shells we placed next to it. In each of these shots are two scallop shells as well as a dark brown piece of driftwood (I think). The wood is behind the octopus and it made it impossible for the octopus to fully close the shells and hide. This might be why it finally abandoned them.

Background: I had never seen one until I dove in Indonesia... and, in going back over my cephalopod shots from the past 2 years - coconut octopuses are my number 1 (in terms of quantity of shots). They're also our absolute favorite octopus with which to play! Don't get me wrong, we don't handle any marine animals. But, with coconut octopus, it's a MUST to see if they want to play. They're the first marine animal that's known to use tools. So, the best thing to try and do - is give them a tool. Specifically, if you can find a couple of shells or a coconut or a well-worn bottle... place it near them, watch them investigate its worthiness, and finally, see if they decide to use it for shelter. The best though, if they really love it, they'll try and take it with them (sometimes resulting in some very awkward attempts to run away while keeping their tool with them).