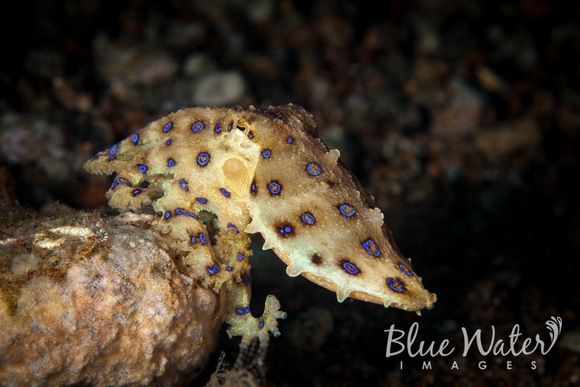 The blue-ringed octopus is one of my absolute favorites critters; they're highly toxic and have the potential to kill anywhere from 26-60 adults (I've heard difference numbers from different sources). And, worse yet, it's apparently a horrible way to go sometimes taking hours. But, as with many marine animals, their bright colors are your warning - BEWARE - this critter is not to be messed with. This is especially true for the blue-ringed octopus as their bite is very likely to be fatal.

My favorite quote from the wikipedia page is: "The blue-ringed octopus, despite its small size, carries enough venom to kill twenty-six adult humans within minutes."

That reminds me of a fantastic (and short) article describing the death of a German tourist that while never proven, is likely to have been caused by a blue-ringed octopus bite. Titled: Death in a Pretty Package you can read about it here.