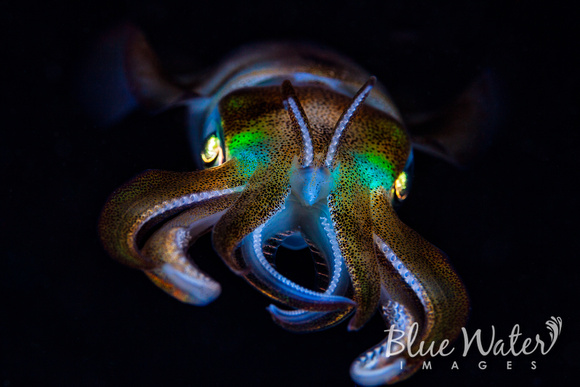 Threat display, communication, or just an alien - not entirely sure?

If you've ever tried to shoot something in the dark, while trying to swim with no visible frame of reference and not touching the bottom (just in open water), while what you're shooting is moving - you now know what trying to shoot squid is like. They're usually NOT on the bottom nor do they stay where you find them. It's often a bit of a dance as they move - you move. But you're both turning AND going up AND down. At the time, it feels like things are in slow motion. Also, as a diver, it usually forces you to change from a horizontal position to a vertical position (which isn't as comfortable for most divers). Then, as the squid moves up (shallower), you get a bit disoriented. And, of course, you have to be careful not to go too shallow (without a safety stop; the good news is that most night dives aren't all the deep so it's not usually a big problem). Within only moments (which seems like hours ;-), often, I get frustrated and decide the disorientation and contortion to get the shot just isn't worth it (or, the squid is going too shallow). But, this particular night - I twisted and turned with the squid and was able to fire a few shots. Don't get me wrong - I did get frustrated - but much less so when I saw this particular shot.

I'm not sure if it's a threat display; it's an interesting formation of its tentacles as the suckers look like teeth to me?! Or, was it trying to tell me something (like bugger off - ok, well, that's back to a threat display?). Whatever the message, I love this shot! I guess I'll continue to get disoriented and contorted when I see squid at night (which, unfortunately, isn't all that often! :)).